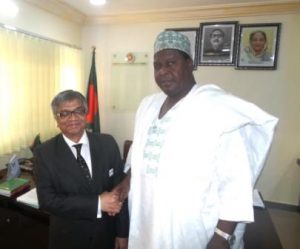 The latest among the long list of countries that have committed to showcasing their unique arts and crafts in the forthcoming International Arts and Crafts Expo (INAC) slated for November in Abuja is Bangladesh and Egypt.

Otunba Olusegun Runsewe presenting some locally made souvenirs to HE, Assem Hanafy Elseify, Ambassador of Egypt during a courtesy visit paid on the Embassy

The Bangladeshi High Commissioner, his Excellency Shameed Ahsan assured the Director-General of the National Council for Arts and Culture, Otunba Oluegun Runsewe of his country’s total participation during a courtesy call to his office in Abuja. The Ambassador stated succinctly that, “Your leadership role encourages us to partner with you”. 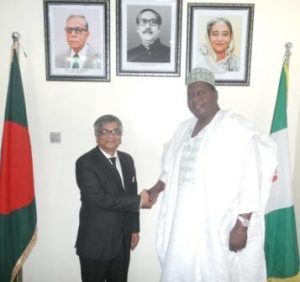 Runsewe responded thankfully saying that this year’s maiden edition of the International Arts and Crafts Expo promises to be the first of its kind in terms of packaging and organization.

The envoy equally accepted to host Bangladesh day during the event to promote the natural endowments of his country to world.

Runsewe has firmly resolved to make this year’s INAC a platform to network over thirty-five countries that have indicated interest to participate.

Some of the countries include Venezuela, Tanzania, Spain, France, USA, Cameroun, Togo, Namibia, Trinidad and Tobago, Syria, China, Pakistan amongst many others.