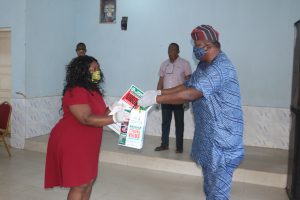 The Director General,  National Council for Arts and Culture,  Otunba Oluegun Runsewe today in Abuja distributed Face Masks and sanitizers to select media houses Speaking to some journalists, Runsewe said that time has come for someone to make special provision for journalists who are also in the fore front on the fight to reduce or eradicate the spread of the much dreaded covid 19 virus that is killing people all over the world.
While consoling the President on the death of his Chief of Staff, Runsewe commended President Buhari,  the Presidential Task Force and the National Center for Disease Control (NCDC) on the measures taken so far to curb the spread of the disease in Nigeria. 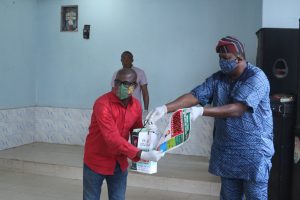 DG NCAC Otunba Olusegun Runsewe with the journalist from Punch Newspapers. Mr. Friday Olokor receiving the packages on behalf of his media house.

He pointed out that the recent directive by the Sultan of Sokoto that there should be no public lectures  during the month of Ramadan is very commendable and worthy of emulation by other religious faithfuls.
Runsewe in addition extended his commendation to other traditional rulers for their efforts in mobilising their subjects against the spread of covid 19 disease.
The Director General who is also the President of the World Crafts Council, Africa Region added that he is extending special thanks to journalists in Nigeria for their special efforts in rising to the occasion  by ensuring  that timely  and effective dissemination of adequate and correct  information about the pandemic is given out to the public in good time. He appealed to the gentlemen of the Press not to relent in their efforts  in sensitizing the masses and mobilizing efforts and resources towards eradicating the much dreaded disease called corona virus or Covid 19. 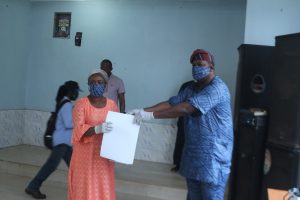 During the Interactive session  with the journalists, Runsewe urged them to be mindful and ensure that they give out accurate information bearing in mind that so many Nigerians believe so much in the information they give them as the latest update in this fight.
In presenting the Face Masks and Sanitizers to the reporters, Runsewe added that he wants to ensure that enough of the face marks and sanitizer are given to each media house so that the people in the news room will also benefit from it. He said he is aware of the importance of wearing face masks and sanitising our hands at all times hence he is making special provision for the journalists who are in no small measure contributing their quota to the fight against Covid 19.
He reminded the journalist that this is a special face masks made from Adire and Ankara fabrics embossed with NCAC logo to avoid imitation and to showcase home grown solutions. He added that the raw materials for both the Face masks and the sanitizer are locally sourced and this intended to create employment for the teeming unemployed youths adding that we must continue  to look inwards for the diversification  of our economy.
In continuation of NCAC contribution to the fight against covid 19, the Council  have also mass produced culture friendly manuals and jotters for other cultural stakeholders.
He thanked all the well meaning Nigerians who has contributed financially to this struggle and urged others to do so.
In conclusion, he appealed to the governor  of Ebony state to amicably resolve the face off with journalists in his state to enable them continue their jobs which is very important at a time like this.
Covid 19: OUR HEARTS WITH THE PRESIDENT, OUR PEOPLE MUST BE STRONG, Runsewe
COVID 19: NCAC TO LAUNCH #PROTECTNAIJAWITHFACEMASK CAMPAIGN