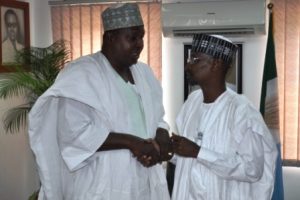 The administration of the Federal Capital Territory has thrown its full weight behind the new leadership of the National Council for Arts and Culture led by the revolutionary Director-General in the person of Otunba Olusegun Runsewe.
The FCT through the honourable Minister, Muhammadu Bello indicated its willingness and commitment to a sustainable working relationship between the FCT and the NCAC in areas of mutual interest towards the promotion of the cultural heritage of the FCT in particular and Nigeria in general.
Speaking during a visit to the FCT by the Culture boss alongside the full complement of his management team, Otunba Runsewe was specific in his demands from the FCT Minister whom he described as a brother and a friend, “ I will like to make some demands from you sir, and they include: first we have an event called Africa Arts and Craft Expo coming up soon and the proposed site for this major exhibition is still under contention and I will implore you to kindly step in with a view to resolving the issues so that we can have a successful trade fair”
Making his second demand, the NCAC helmsman highlighted the benefits of hosting foreign Ambassadors before the planned Expo as a prelude to preparing them for the mega event which in his opinion will serve as a window for showcasing the rich cultural potentials of the FCT and Nigeria to the visitors and by extension, the world.
He further intimated the Minister on the new hash tags introduced by his council which include, “#ThinkNigeriaFirst” and “#ThinkCulture” in a bid to entrench a reorientation amongst Nigerians aimed at promoting patriotism and love for the country’s rich and diverse cultural heritage.
Responding to Otunba Runsewe’s demands, the Hon. Minister expressed satisfaction and delight in the job done so far by the NCAC boss saying they had a longstanding relationship with his guest spanning decades while promising to resolve the contentious issues raised by his guest whom he described as a man full with energy and novel ideas. Mr.Bello pledged his support for the DG saying his appointment was indeed a round peg in a round hole.
He revealed that the FCT under his management was emphasizing the completion of unfinished infrastructural projects within the main town and then extends such initiatives to the satellite areas advocating for stronger cultural statements championed by NCAC in order to make Abuja attractive to both Nigerians and foreigners especially.
RUNSEWE, MAGU TO TACKLE CORRUPTION VIA CULTURE
NCAC ENDORSE PRESS GALLERY FOR AFAC/NAFEST 2017