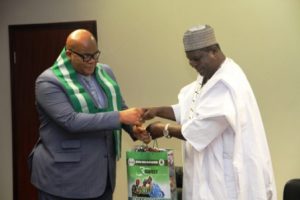 The development of Nigeria’s Art and Crafts sector will now take centre stage amongst other issues at the next edition of the Nigeria-South Africa bi-national commission slated for later this year.

This was revealed during a courtesy call on the South African High Commission in Abuja by the Director-General National Council for Arts and Culture, Otunba Segun Runsewe and his management team.

Addressing the delegation from NCAC, the South African Deputy High Commissioner to Nigeria, Bobby Moroe expressed his delight at the visit saying it was auspicious as both countries had already signed several MOUs to boost bilateral cooperation adding that Art and Crafts development will now be prioritized in the next Nigeria-South Africa bi-national commission where both countries will also seek areas of mutual interest in energy and agriculture.

Mr. Moroe reaffirmed that the visit of Runsewe and his team will signal a new era for the culture and arts industry for both nations stressing that the Nigeria-South Africa bi-national commission is a veritable platform where issues of development are deliberated upon followed by strategic implementation plans recalling that in 2001, the two countries signed an MOU to improve bilateral relations.

The envoy revealed that at least 34 agreements will be reached in the forthcoming Nigeria-South Africa bi-national commission where President Muhammadu Buhari will be in attendance noting that the Art and Crafts sector will be a major beneficiary in this year’s outing.

Reacting to the envoy’s remarks, Otunba Runsewe thanked his host for receiving him and his management team observing that South Africa was a country with great organizational capabilities and vast resources intimating that his visit was informed by the need to gain support as the NCAC plans to take Commissioners of Culture in Nigeria to a farm trip in South Africa as a way of exposing them to the high standards that his country has attained, which according to the DG will translate to major gains in the arts and culture industry in Nigeria.

Runsewe also seized the opportunity to intimate the Ambassador on the forthcoming International Arts and Crafts Expo (INAC) which will be held in Abuja November this year requesting that South Africa should maximize the platform to showcase her rich cultural heritage just like other countries around the globe that have indicated interest to participate in the exhibition.

Mr. Moroe commended the INAC initiative, promising to interface with the authorities back home with a view to ensuring South Africa’s full participation. He  thanked  Otunba Runsewe for the locally made gifts of laptop and ipad pouches which the DG presented to him. The Director General also decorated the S.A envoy and his staff with the official NCAC pinup thereby conferring on him the dual status of South Africa and NCAC Ambassador.