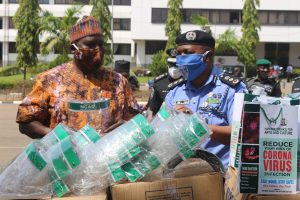 Making this donation, Otunba Runsewe commended the gallantry of the Police Force and their commitment to the enforcemnet of Covid 19 guidelines.

The NCAC boss also commended the Inspector General of Police for directing members of the force to respect human rights citizens in the discharge of the Covid 19 duties.

He also thanked Mr. President for showing exemplary leadership and commitment to the eradication of the epidemic. 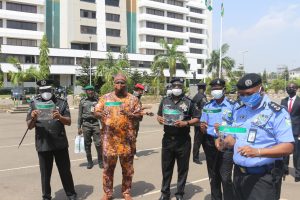 The DIG noted that the donation by the Director General of NCAC is yet another demonstration of his outstanding commitment to duty and to the development of the Nigerian nation.

The items donated by Otunba Runsewe includes locally made customized face shield, regular face masks made of local fabric and Sanitizers, liquid soap, Information and Communication materials among others.

It will be recalled that on April 23rd this year, the Director General of NCAC formally launched the Covid 19 Person Protection Equipment that was mass produced for distribution to people and institutions in the frontline in the fight against Corona Virus.

Runsewe called on all members of the public to see the Covid 19 epidemic as a national emergency and urged everyone to join hands with the government at all levels to overcome it adding that with God on our side, we will all see the end of the epidemic.