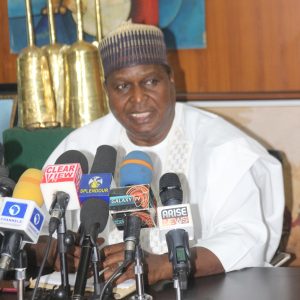 Director General National Council for Arts and Culture (NCAC) and President, World Craft Council (AR) Otunba Olusegun Runsewe has described the donation of Thisday dome in Abuja by nduka obaigbena, a Frontline media entrepreneur as the gesture with most humane touch.

Chief Nduka Obaigbena is the publisher of the iconic Thisday newspaper and chairman of Arise Television, who despite the many challenges posed by covid 19 pandemic on the media sector, went out of his way to donate the mega dome and converted it to a 320 bed covid 19 isolation center.

Impressed and touched by the gesture, otunba Runsewe stated that all men of good will, particularly in the media and creative sector should emulate the footsteps of the Thisday publisher, to help touch and bring succour to the vulnerable souls in need of care and preservation.

” The Duke of Nigerian media has shown the true colours of the true nigerian entrepreneur. He is one of our best, showing the very exampelry love of media persons in truth and spirit to the commitment of national unity and development.” NCAC boss explained.

Runsewe who is patron of the organised nigerian media practitioners, Nigeria Union of Journalist (NUJ) further salutes the Arise Television chairman, describing 320 bed facility donated to the federal government as world-class, reflecting the detailed response of a media mind to challenges and expectations of this uncertain times.

” The Duke of the nigerian media certainly has made the nigerian media community proud, he is possibly the first media face globally to respond to the yearning to help arrest the demons of this pandemic. We are proud and commend his sacrifice.” Runsewe added.

On Wednesday, nduka Obaigbena presented the Iconic Thisday dome converted to 320 bed isolation center to the minister of Health, Dr osagie Ehanire who received it on behalf of the federal government.