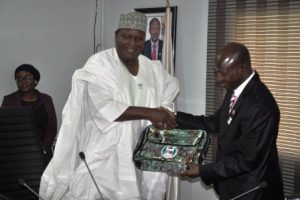 The Director-General, National Council for Arts and Culture, Otunba Olusegun Runsewe and the acting chairman of the Economic and Financial Crimes Commission (EFCC), Mr. Ibrahim Magu have agreed on a holistic approach of cultural reorientation among Nigerians as a permanent solution to stemming the menace of corruption in the country.
This position was adopted and agreed upon when Otunba Runsewe alongside members of his management staff visited the headquarters of the EFCC in Abuja, Tuesday.
As part of the itinerary for the visit, the NCAC DG took the campaign of cultural promotion to the headquarters of Anti-corruption agency in Nigeria suggesting that for corruption to be nipped in the bud, Nigeria needs to re-evaluate her value system which at the moment glamorizes people with questionable sources of income at the expense of hard work.
Runsewe while commending the acting head of the commission for using his zeal, vigor and doggedness to fight the monster called corruption that has eaten deep into the fabric of the nation said, “As you are doing everything to make the nation safer through waging war against corruption, posterity will remember your good works and I believe it is time to introduce a cultural angle in order to fight corruption to a logical conclusion.”

Speaking further, Runsewe praised Magu for being fearless against all odds and fighting the looters to a standstill in the process not even sparing his in-law. In his words, “The message we are here to convey is that corruption is not in our character/culture and to also put on record that 66% of the crimes committed outside Nigeria are not by Nigerians.”
“It will also interest you Mr. Chairman to note that if every criminal that has committed crimes outside the shores of this country is sent to EFCC after being deported, crime will be reduced to the barest minimum by now especially with effective biometric system for crime detection,” He added.

Runsewe lamented that as a result of our population, the porosity in our borders and the acquisition of Nigeria’s international passport by criminal foreigners, every crime committed by any black man in most parts of the world is ascribed to a Nigerian revealing that whereas, most of the crimes are perpetrated by non-Nigerians.“We strongly believe the Federal Government’s policy of whistle blowing must also be commended because it has brought about positive cultural re-orientation of our people as they participate in fighting corruption anywhere they perceive it.”
On his part, the EFCC chairman thanked the doyen of culture for his kind words promising to fight on irrespective of how corruption is fighting back. He implored all Nigerians to champion the fight against corruption as its remains the only monster against all of us as a nation.
He observed that all the agitations erupting in our land recently are created by corruption citing the Boko Haram menace and IPOB agitations saying, “please kindly take this message to all Nigerian, we can only be great if we collectively join hands and fight corruption to a standstill, it is an understatement to say that corruption as bedeviled our development and unity as a Nation.”
The helmsman of EFCC further charged his guests to also ask people the source of their unexplainable wealth, “a situation where people are celebrated without knowing their sources of money must be discouraged. People build mansions with corruption and are being celebrated; we must be united against such people for us to have a prosperous Nation.”
Mr. Magu added that, “if we overcome corruption, the survival of our Nation will be secured and the Champaign against corruption can only be won if we all support the fight irrespective of our tribal, ethnic and religious sentiments.”
Otunba Runsewe used the opportunity to decorate the EFCC boss with the iconic pin crest of NCAC and gave him a well crafted, locally made laptop bag thereby confirming his host as a cultural ambassador of Nigeria.